AGT Embassy (Yihelli Quadrant) is a star system in No Man's Sky.

AGT Embassy (Yihelli Quadrant) is a yellow binary star system in the No Man's Sky universe.

The star system is estimated to be 3.7 billion years old.

This star system acts as the capital of AGT in the NMS universe. This system serves as a NMS Hub and Intergalactic headquarters for the Alliance of Galactic Travellers. The AGT has a mixture of PC (Steam, GOG, Windows Xbox), PS4/PS5 and Xbox Travellers at the capital. The AGT requires maximum compliance to the AGT Naming Convention in the Yihelli Quadrant region.

Besides being a meeting place, the HQ system is used for research projects and lore. The embassies are Civilized space anchor points for all Travellers of the AGT and the NMS players that visit them.

By PS4 explorer halogengirlie on AGT Stardate 3734.24.9 (24-Sep-2018). There is a claim documented by Alliance of Galactic Travellers.

This star system contains 5 planets. AGT Nexus (Yihelli Quadrant) serves as the headquarters for the Alliance of Galactic Travellers.

It is located in the mid-section of the Yihelli Quadrant region of the Euclid galaxy. 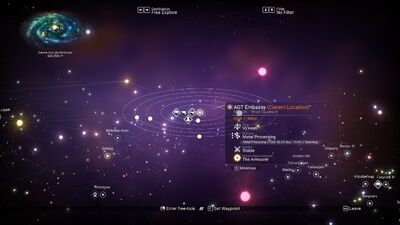