Adurma is a star system.

Adurma is a star system in the No Man's Sky universe.

Adurma is a yellow star system in the No Man's Sky universe. It contains 5 planets. The Vy'keen faction inhabits this system. The system economy is primarily manufacturing. The economic conditions are balanced.

The star system is estimated to be 4.1 billion years old.

It is notable as the capital star system CELAB Galactic Industries and the home base of PC AGT Traveller Celab99. The primary base of explorer Celab99 is located on the planet Adurma Prime Water. A secondary base is located on Adurma II.

By PC explorer celab99 on (29-Oct-2018). There is a claim documented by CELAB Galactic Industries.

The following planets are present in the system:

It is located in the Fiquencha region. It is estimated to be 706,863 light years from the galactic centre of the Euclid galaxy. 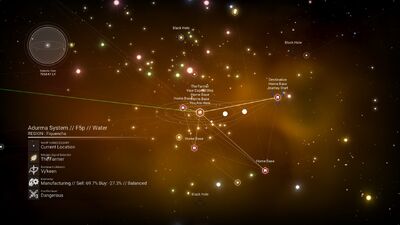 A Class A-16 slot Dreams of Supplication Rifle Multi-tool was found at the Space Station.