There are multiple game-release versions of the Amino Prime - AH system page.

Amino Prime is a star system.

Amino Prime - AH is a yellow binary star system in the No Man's Sky universe. It contains 6 planets. The Korvax faction inhabits this system. The system economy is primarily industrial. The economic conditions are developing.

It is the capital system of the Amino Hub. It was also the location of the opening ceremony for the NMS Olympics 2017.

By PS4 explorer doglegsxr on 23-Mar-2017. There is a claim documented by Amino Hub.

The following planets are present in the system:

It is located in the Ocopad Conflux region. It is 665,698 light years from the galactic centre of the Euclid galaxy. 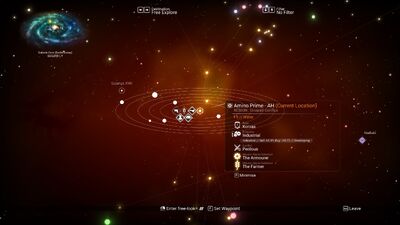