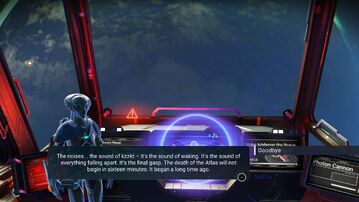 Artemis is an NPC in No Man's Sky.

Artemis is a member of the Traveller species and a central character in the main storyline of No Man's Sky. The character was introduced in the Atlas Rises update.

Artemis appears in several of the missions comprising the Artemis Path.

Alone Amidst the Stars[edit | edit source]

The player first learns of the existence of Artemis when they come upon their Crashed Ship and find their ID in its Distress Beacon. When they leave the planet, the player is contacted by Artemis and learns of their plight.

Soon after, the player contacts Artemis again, this time via Holo-Terminus. In this conversation, Artemis tells the player to triangulate their position by using a Signal Booster at three specific locations.

A Leap in the Dark[edit | edit source]

After the player passes through a Portal and reunites with their Starship, they investigate a distress signal on their planet. They discover that the source is the Traveller Grave of Artemis, and the player questions whether Artemis was ever alive in the first place.

After another conversation with -null-, the player travels to the Space Anomaly and speaks with Priest Entity Nada and Specialist Polo concerning what can be done with the soul of Artemis. After learning of the available options, the player has one of two choices:

Later in the mission, Artemis, if they are alive in the simulation, contacts the player via Holo-Terminus immediately after a conversation with -null- to inform them of how they are coming along. At this point, the player must choose whether to tell Artemis the truth or keep them in the dark.

Artemis, if alive, contacts the player in the middle of their second Explorers Guild mission to tell them of a dream they had. Again, the player must choose whether to tell Artemis the truth or keep them in the dark.

Artemis, if alive, contacts the player one last time after the player's sixth Hyperdrive warp. The player must choose once more whether to tell Artemis the truth or keep them in the dark; regardless of which choice is made, Artemis gets stuck in a loop, causing the player to come to a profound realisation concerning the death of the Atlas.