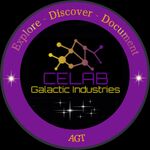 CELAB Galactic Industries (with its subsidiaries) currently has three employees and four NPC advisors (Chief of Farming, Chief of Weapons, Chief of Construction, Chief of Transport) who are based in the Adurma system.

"Exploring the Universe...Documenting the Knowledge to live forever."

The flags and banners to be flown at each CELAB Galactic Industries base or outpost are as illustrated.

Purple/Yellow are the official colors of the company.

Further details on flag/banner registration can be found at the Federation Vexillology Department.

Notes: Above numbers are being revised regularly to complete tagging of research team identification. Fauna and Starships expected to complete end of June-2021.

If your corporate organization or civilization wishes to establish a partnership with the company, please contact the CEO on one of the communication channels identified in the CONTACTS section of this page.

If your organization wishes to establish a partnership with the company, please contact the CEO on one of the communication channels identified in the CONTACTS section of this page.

CELAB Galactic Industries is a Corporate Entity focused mainly on exploration in the Euclid galaxy in PC Normal mode.

All systems and research are open to all Travelers. Any traveler is welcome to apply to join the CELAB Galactic Industries by joining player games on steam with user Celab99.

Recruits are advised that if they exhibit signs of violence, hostility, profanity, or damage a company entity base then the traveler will be immediately and forcefully ejected from the company and banned from participating in future sessions.

If you wish to join the winning team, you must meet the following to qualify:

If you agree to all of the following, contact the user Celab99 on steam to join in a CELAB Galactic Industries exploration session.

If you prefer to play in your own session, it is mandatory that you follow the CELAB Galactic Industries naming convention rules for star systems and planet names when you rename them and upload to the NMS galactic database.

CELAB Galactic Industries does not discriminate against potential employees, partners, allies, or customers based on race, sex, religious beliefs, age, or past affiliations.

Restrictions on Prior Association[edit | edit source]

if you are now, or were in the past (either self admitted or identified by credible members of the NMS community) affiliated with certain organizations then you may not join the company. The following are declared "firma non grata" or present/historical civilization citizenships from whom members/citizens are not welcome to the company:

In addition, the following organizations have self-declared hostility to the Alliance of Galactic Travellers and the United Federation of Travellers, both of whom are close partners with CELAB Galactic Industries. As such, those with an association now or in the past with these organizations will be treated with special attention:

Employees are obligated to submit their discoveries to the company and to create wiki pages for them. Further details will be provided upon joining the company. The company will provide training and tools to assist in the wiki page preparation.

CELAB Galactic Industries does not support the use of its products or services for violent ends, specifically including but not limited to:

Secondary tasks are ongoing and include:

CELAB Galactic Consignment Services - The company has currently put all consignment activities on hold due to existing AGT commitments.

CELAB Galactic Industries can be contacted a number of ways: