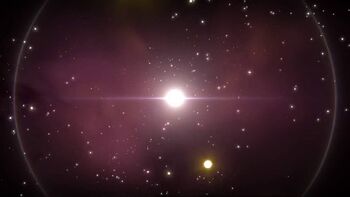 Core to Core Jump is a method of travel.

This innovative technique for traveling through galaxies was originally discovered by DJLemon-HouseM. It was further explored and refined by InExCor explorers.

In May 2020 Ygolnac with the aid of Peacebomb refined and published this technique after a month of research.

Initially it was thought that giving birth to a Star using an Atlas Interface and the Heart of the Sun blueprint was necessary, but it was determined that simply passing through a black hole was the only prerequisite to do a Core to Core Jump. This allows the most recent theory concerning the Atlas influence to be discarded and assumes that some hidden properties of the Hyperdrive technology are in place. Possibly the device itself gets hypercharged for short periods of time after passing through a black hole.

Ironically, this method of travel was discovered only a couple of months after InExCor CEO Peacebomb traversed all the 255 galaxies in the old way, navigating each from the spawn rim to the core.

This technique has been tested as follows:

Fast travel to next Galaxy Core.