From No Man's Sky Wiki
Jump to: navigation, search
This page fills the role of Embassy for a Civilized space community. The information found here represents a user-created civilization that is a creative addition to the game.

There are multiple versions of the Eyfert Khannate page based on game release.

The Eyfert Khannate is a civilization exclusively found in Survival Mode and based in the first red galaxy, Rerasmutul. It is ruled by one person, the Khan. Its mission is to explore the vast, uninhabited emptiness of Rerasmutul while providing various exploration and pathfinding related services. Formerly found exclusively in Rerasmutul, various improvements to teleportation technology made it possible to expanded into Euclid. However, contact with other civilizations is still somewhat limited as the civilization is located almost exclusively in the Survival esoteric cosmos.

2 - GITGUD is an alliance composed of three megacorporations. After a heated discussion with the Khan, they ended their coup and are given autonomous control to a region.

3 - Due to a discovery of planets farther away from the point of entry having the new terrain generation and numerous beautiful finds, the Exalkisi Sector is brought back under Eyfert Khannate Control.

Travellers who wish to visit the Eyfert Khannate must go through here first.

The Eyfert Khannate isn't expecting visitors anytime soon due to its great distance from highly populated galaxies like Euclid and Eissentam. But if someone wants to pay a visit to such a distant place, there is a way to shorten travel time.

First, complete the Storyline. Before starting "The Purge", head to the Calypso galaxy. Once in Calypso, complete "The Purge". When in the Atlas Interface, reboot the universe and choose Raging Galaxy. You will be transported to the 15th galaxy Ogtialabi. From there, head to the center of Ogtialabi, Muhacksonto and Hitonskyer to reach Rerasmutul, the first galaxy with a red core.

Travelers entering the Eyfert Khannate must go through a secure port system, Dairas-Lomera. Upon arrival, travelers will enter the ever-so-beautiful, totally friendly, heavenly paradise planet Zawaii XIX. The civilization expects all travelers to prepare for a smashingly beautiful vacation at Zawaii-19, because it is assumed that one travelled such a distance for a nice, relaxing vacation in a beautiful paradise world, complete with Zawaiian music and Zula dancers!

All civilizations planning to have an embassy or office within Eyfert Khannate space must claim a star system in the nearby Ekreen region and rename the system according to the naming guidelines below. 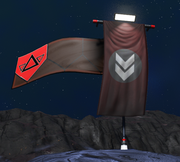 Official flag and banner, registered in the Federation Vexillology Department.

The Eyfert Khannate's naming convention is used only when there are multiple civilized spaces in a galaxy.

Naming guidelines in regions outside the main areas of control:

We will not stop searching until we find a region, system or planet meets or exceeds your criteria. An example - This is how much time and effort it took to find a suitable location for Unification Day 2020. Don't worry! The "Upload All" button is not pressed!

We are highly experienced in the field of exploration and pathfinding. We provide the following services:

An Elite Army Kinderkin in his uniform. Note the height difference compared to a normal Vy'keen and Korvax.

The Eyfert Khannate is an almost homogenous society. Most citizens are of one race, the Kinderkin. They are a species of deliciously edible humanoids that greatly resemble human children, except they live twice as long and have more durable bodies. In-game, their appearance would be something like this: About 60-80% the height of the Anomaly with body type 4, but with the lankiness of body type 3.

They have a peculiar and rather twisted religion which involves intentionally worshipping and viciously harming their deity: Rakkunism. The so-called deity is currently being relocated to a new Garbage Dump Planet that is less worse than the newly discovered one. Kinderkins violently torturing their deity must be done in full concentration, free from distractions such as pesky Sentinels. This is most likely due to their troubled history as chattel slaves, livestock feed and being a delicacy of the highest order in the past, when the Sugaikinovians first discovered them.

The Euclid Expansion is located in a star-poor region called the Tenerris Instability.

Despite the Eyfert Khannate having two distinct areas - the Blue Zone and the Red Zone, it is still a dictatorship under full control of the Khan. However, an alliance of powerful and wealthy megacorporations called "GITGUD" (Great Itney Trio Group Under Duling) rose to power and is given near-total autonomous control over the Blue Zone.

Despite being a member of the United Federation of Travellers, the Eyfert Khannate is isolationist in nature, preferring to not interfere or participate in most events. But when it comes to exploration or pathfinding-related tasks, they won't hesitate to offer their knowledge and expertise to those who need it. There is only one civilization it has significant contact with: The Galactic Hub.

Due to a universe-changing event, it was discovered that the old embassy system, HUB10-44 Masaoka-Olney, is already discovered by someone else. As a result, the embassy has moved to a new system.

Contact with GenBra is initially limited to u/intothedoor passing the Test of Strength with flying colors in the former port system and properly documenting it in Hikhot-Riwo (PS4). This grants him and the company access to the civilization. This is still in effect due to the current port system being somewhat less hostile than the previous one. As the boundaries between dimensions becomes more blurred as time goes on, both civilizations are working to make greater contact in the near-future. However, being found in different planes of existence (the Eyfert Khannate is almost exclusivley in Survival while GenBra seems to be in Normal?) may still limit contact with GenBra.

Project Elskyvin is a science-focused research. Its aim is to document star sky colors for all spectral classes. The project is ongoing and is approximately 25% complete.

Results: Spectral numbers 0, 1, and 2 are complete. 3 - 9 are still ongoing. Red stars don't seem to follow the trend but yellow, green, and blue stars are consistent. A gallery will be available soon.

Update: Project Elskyvin is out of hiatus. Research will continue but will focus mainly on single-star systems.

Operation: Lonely Red Dawn is an pathfinding-focused mission. The citizens got alarmed over the significant easing of intergalactic travel, prompting discussions on whether to stay or to move to another galaxy. This operation is currently on hold until further notice.

Eyfert Khannate: Origins is a science-focused project dedicated to exploring the Kinderkin's origins. Volunteer scientists will be sent to the Sugaikin Boundary and Kukasoo Void to study and compare noteworthy systems. The project is currently suspended due to an event resulting in the Khan's disappearance.

These are systems of significant importance.

Outposts are single stars claimed outside of Eyfert Khannate space. A base is built to facilitate ease of travel across large distances to various points of interest. Currently, there are 6 outposts. One in Hirulloco outside of the official expansion area, another in Goquaornsax, Luhuangatis, Jagaimyarba, Yombesagru and a hidden, top-secret outpost somewhere in Rerasmutul.

Unanimously chosen by literally everyone, even gaining total bipartisan support from the Khan and GITGUD, this system is so bad, it makes the former garbage dump Nisiyskoid look like heaven on heaven. It is SO BAD, it is just way too bad to relocate the deity of Rakkunism there. Despite the logistical challenges of intergalactic travel, there is collaborative effort in making it easier, as everyone can't wait to violently destroy such a horrible system.

The Eyfert Khannate is civilization that is really picky in finding a home. Here are the requirements for civilization formation:

Once these requirements are fulfilled, the civilization will form. Trade routes, prison systems and more discoveries will follow.

Conditions for making an expansion are more relaxed.

The Eyfert Khannate's economy is capitalist in nature with multiple sources of income. Their main sources are trading and farming, while secondary sources include purging PESTINIA PESTIS from existence.