No Man's Sky Wiki
Register
Don't have an account?
Sign In
Advertisement
in: Frontiers, Alliance of Galactic Travellers - Systems, Eyugoi

Edit
The subject of this article is from the Frontiers update.
The information from this article is up-to-date as of 15 February, 2022.
This article was catalogued by Alliance of Galactic Travellers.

Eyugoi is a star system.

Eyugoi is a yellow star system in the Louyen region. It contains 3 planets and 1 moon. The Gek faction inhabits this system. The system economy is primarily material fusion. The economic conditions are balanced.

The star system is estimated to be 4.9 billion years old.

By PC explorer ArononymouS on AGT Stardate 3733.21.10 (21-Oct-2017). There is a claim documented by Alliance of Galactic Travellers. This system is informally considered part of the AGT as it is in a region claimed by the AGT.

No documented starships found at these coordinates.

It is located in the Louyen region. It is estimated to be 4,128 light years from the galactic centre of the Hilbert Dimension galaxy. 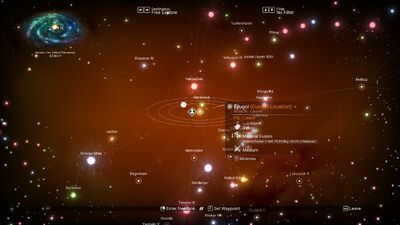 A Class B-14 slot Electric Inertial Needler Rifle Multi-tool was found at the Space Station.