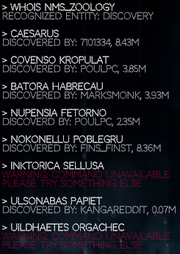 Various "first in their category" species from the Hall of Fame were displayed in the Waking Titan ARG. Some "Smallest" species (red text) were not added.

The Fauna Hall of Fame is a list of creatures.

Origin of the Hall[edit | edit source]

Originally created on the subreddit NMS_Zoology, the Hall of Fame (or HoF) is a list of the largest and smallest wild fauna in No Man's Sky.

Although the HoF was created by players, the Hall of Fame has been referenced by Hello Games and the Waking Titan ARG, making it (perhaps) a semi-official resource. There is no other known record of its kind, making the HoF an invaluable tool for curious players, tourists, and exozoologists.

For more information, including the actual size data, please refer to one of the two primary Fauna Hall of Fame pages: