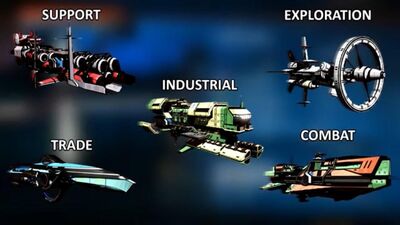 Frigates are ships larger than a single-user starship, but smaller than a freighter. They can usually be found surrounding an NPC freighter. A player can own up to 30 frigates once they command a freighter. Frigates can then be sent on expeditions to other star systems.

The frigate fleet is controlled by the Fleet Command Room, located on the freighter that commands the fleet. Building more than one Command Room allows the player to have multiple active missions with different frigates at once.

A list of documented frigates is available at Starship Catalogue - Frigate.

In order to hire a frigate the player must travel close to the frigate's position and, once the frigate captain is open for communication, use their intercom (via quick menu) to talk to the captain and choose the option to hire their services. Not all frigates that spawn are available for purchase.
The fleet can have a maximum of 30 frigates. You can dismiss unwanted frigates using the middle mouse button.

The five types of frigates are as follows:

With over 60 potential points in their lifecycle and growth, it would seem unimportant which frigate to buy. However, there is a difference of more than 15 points between the best and the worst frigates. Additionally, some frigates consume considerably more fuel than others, which can cripple your fuel supply by as much as 50%, weaken the entire armada by approximately 50% early on, and then remain weaker by up to 20% over the long term.

Your navigator presents five new expeditions per day (0:00 UTC reset) on the freighter bridge for up to 5 frigates each. Since the duration of some expeditions is greater than one day—and since you could take all the available missions just before the daily refresh—it is possible to have more than five of them active at the same time.

The main goal of expeditions is to gather units, artifacts and rare items for their player owning the dispatching freighter. Expeditions can be accessed by talking to the Navigator standing next to the star map and existing expeditions can be managed by visiting the Fleet Command Room assigned to that fleet. Each Fleet Command Room build allows an additional concurrent expedition. Each expedition itself can take anywhere from 1 to 28 hours in real time, and progress even while the game is not running. Critical events that can lead to the loss of frigates also happen in real time. If the player is not there, they can not intervene in time.

Certain frigate traits affect other frigates in their party and make the journey easier and less costly; or with certain traits harder and more expensive.

Frigate expeditions are rated in difficulty between 1 and 5 stars. While the frigates have lights shown on the fleet management menu, those are not their star rating, but the amount of positive traits. The actual point values matter here! It is recommended that the total star rating of the frigate team after calculation is at least 1 star higher than the difficulty of the expedition. If the team rating is equal to the expedition difficulty there is a chance that the frigates will be damaged, and if the team rating is lower than the expedition, frigate damage is very likely and a loss could occur. Also note that lower class frigates are more likely to be damaged than higher class ones. If a damaged frigate continues its mission and gets damaged again, it will be destroyed and cannot be recovered.

Expeditions focus on one of the five areas:

Game files show that, even during expeditions of any of the four specialist types mentioned above, expeditions will randomly include occasional encounters of other types, which means that all expedition fleets should avoid leaving extreme weaknesses in any stat.

Each frigate will have base stat values for each of the 5 areas that will start at zero for fresh frigates that have not yet been to an expedition, and will then slowly increase the more expeditions the frigate has been to, see "Ranks" section below for more details.

Each frigate will have its base stats augmented by between 1 and 5 traits. The combination of base stats and trait-sourced stats will be combined into the overall stats of the frigate that will determine the success or failure chances of any expedition this frigate will be assigned to. Note that eventually with more expeditions any negative traits will be removed and replaced by positive ones (but possibly from a different area. Also, a small negative trait in some cases could well be outweighed by a large base value for a stat, thus resulting in a net positive stat in that area.

Each frigate will always have 1 out of 5 mandatory beneficial traits corresponding to the specialism of this frigate:

Additionally, each frigate will have up to 4 other random traits (including both beneficial and detrimental ones) from the following list of known traits (the list is work-in-progress), grouped by trait category. Note there are no frigate-type restrictions for optional traits, so e.g. a Combat Specialist could well have a trait boosting Trading etc., and also there are no restrictions on duplicate trait categories (so e.g. multiple Combat-impacting traits including multiple beneficial ones on a single frigate are possible). Click Expand to view the table:

Over the course of many expeditions, the frigates lose negative traits and gain more positive abilities and base stats. The rank up hereby is based on the number of expeditions with an ever increasing demand early on and a static drop to 5 expeditions later. This can be checked on the Manage Fleet panel, where each frigate keeps track of how many expeditions they have been on.

Each time a frigate's rank is increased one negative trait is removed, if the frigate has any, or a beneficial trait is given. Further each of the four stats is increased by 1 with an additional 2 points being randomly distributed over all categories. The total growth per rank is 6 points. These points are unrelated to the class, type, race or flavor text of the frigate. The seed for their growth however is static and can not be circumvented by reloading.

Class upgrade (from C to B and so on) depends on the total number of the beneficial traits, hence it is possible to calculate how many ranks up are needed to reach class S.

Even after a frigate is promoted to S-class, it can still continue to improve its base stats (6 randomized points per rank), but it will no longer gain new traits. It will reach its maximum stats when 55 expeditions have been completed. Once that happens, the total stats difference between a maxed out frigate and another will be mainly due to their traits. (Max stat condition is indicated by the disappearance of the "Progress to Next Rank" percentage dial)

Each frigate has a starting mood for their crew and its changes only on the frigates returning from expeditions. There is no information about whether this would affect the expeditions in any way.

The following examples for crew mood changes were documented for successful expeditions:

Each expedition provides three slots for consumable frigate upgrades that provides a bonus and lasts for one expedition.

The designation of the frigate changes with class.

Use the screen on the freighter bridge to see the frigates fuel consumption. Fuel consumption is given in X tonnes per Y light-years.

The frigate fuel blueprints are rewards for finishing the Freighter Command mission. After crafting and storing them in the freighter inventory, will allow the frigates to use them. Frigate fuel is made of 1 part Di-hydrogen and 1 part Tritium, and comes in 3 flavours; 50 tonnes, 100 tonnes, and 200 tonnes. When using fuel, smaller quantities stored will be used first. If the expedition requires 200 tonnes, the game will consume 4 units of 50 tonnes, or 2 units of 100 tonnes first. Excess fuel is kept as smaller quantities. If a 200 tonnes unit is consumed for a 150 tonnes expedition, the player will receive a 50 tonnes unit given if the freighter has space to hold it.

The fuel costs per expedition depends on three points:

And because the shortest value for frigate fuel is 50 tonnes, total fuel costs must round up to the next multiple of 50. Note that this means that 50 tonnes per ship is an irreducible minimum, except for Support ships.

This section only concentrates on support specialists' fuel (dis)advantage and ignores benefits from all other stats.

For the game it means:

If a frigate was damaged during an expedition, the damaged frigate returns to the freighter and is marked in red. This means that a frigate's subsystem is critically damaged and sending the frigate in this state on another expedition may lead to further damage and a loss of the frigate.

To repair the frigate, the owner needs to fly over in their spaceship and land on one of the frigate's landing pads, at which point the frigate's captain contacts the player and marks the Damaged Components. Follow the red marks to find the damaged components, which can be inside or outside the Frigate, on various ramps, but will always be accessible by foot. Some may be accessed through doors or up ladders. When you reach the damaged component, a repair interface will appear. The required materials for the repairs should be stored in the player's freighter, starship or exosuit inventory to be usable during the repair process.

The "Times Damaged" counter tracks the number of times each frigate required repairs. The value may be checked on the freighter's Bridge.