From No Man's Sky Wiki
Jump to: navigation, search
This article was catalogued by Galactic Hub Atlas. 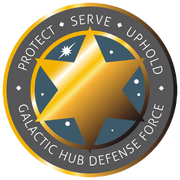 The logo of the GHDF.

The Galactic Hub Defense Force (GHDF) is the combined domestic police and military force for the Galactic Hub civilization. The GHDF was formally established on May 24, 2018, in anticipation of the PVP multiplayer features announced as accompanying the NEXT update.

In the Atlas Rises update era, the GHDF served no in-game role. Instead, the GHDF strictly focused on vetting volunteers, accepting recruits, and preparation for NEXT (such as obtaining and outfitting the Riokazat S45 (the official GHDF starship in the pre-NEXT era).

During the NEXT update era, the GHDF acted as public servants and protectors of the Galactic Hub population. The GHDF occasionally acted in matters outside the Hub, such as defending other civilizations from an organized attack or responding to distress calls within United Federation of Travelers space.

The Beyond era has seen the GHDF's purpose increase in light of the improved multi-player potential. The GHDF have continued to evolve and face any issues, that have arisen. Distress calls are now handled more efficiently, and are responded to on average, in less than three minutes. The GHDF are constantly patrolling densely populated areas, such as colonies, and are always on stand by to deal with any attacks from hostile entities. The GHDF have also adopted a new fighter, as their official GHDF patrol ship, after the NEXT update modified the appearance of the Riokazat S45.

The GHDF have also assisted the community at large by patrolling the community event sites. They have been systematically identifying and targeting hostile players, that try to prevent others from completing the event.

GHDF operatives may retire at any time and return to "civilian Hub life," although higher ranks may be requested to remain in their position until a replacement can be found.

The GHDF's primary domestic responsibility is patrolling busy systems and responding to any distress calls. In the context of the GHDF, distress calls are, essentially, messages from human players saying, "Help, I'm being attacked at (coordinates)!"

Galactic Hub citizens can issue distress calls on the discord server, on the trades and services channel. The instructions on how to do so, will be on the pinned message on that channel.

This exosuit serves as the GHDF uniform. All active officers must use this when on duty. The helmet only applies to officers of the anomaly race, any officer that plays as any of the other races (Gek, Korvax, Vy'keen or Traveller) are not required to wear it. Senior officers of rank (ADM-7) or higher are not required to wear the uniform, but can do so if they wish. It is the responsibility of all GHDF officers to unlock all pieces that make up this exosuit. A reasonable time frame will be given to new recruits to obtain it.

This all white fighter is the official patrol ship of the GHDF. All officers will be HUbered to it's location once they have achieved the rank of Senior Chief for security purposes. Officers will have to prove themselves, before they gain access to the patrol ship.

The patrol ship may be flown while off-duty and used for all regular starship purposes. It must be used while on-duty, as it serves as a uniformed vehicle.

The Oculus is the orbital base that serves as the Headquaters of the GHDF and is available on all platforms in an undisclosed location. It is available to all officers ranked SC-2 and above.

Part of the Interior of the Oculus.

The Oculus contains both training facilities, as well as most buildable tech, to help keep officers prepared and stocked up for whatever scenario they may face. It also serves as a social area, for officers to both enjoy and prepare in.

A video tour of the Oculus is available to watch here. 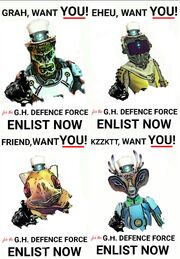 To join the GHDF, you must fill out the GHDF Volunteer Form.

After filling out the GHDF Volunteer Form, the Galactic Hub Council (particularly GH Founder u/7101334 & GH Head Security Officer u/MrJordanMurphy) will examine your volunteer application and, if possible, confirm your intentions, identity, and any other relevant information. This is referred to as "the vetting process." The vetting process usually takes a minimum of two weeks, however it all depends on the volume of applications.

The goal of the application process is to select potential GHDF operatives who are looking to join the force for the right reasons. It also assesses your current skill and experience in NMS. However, your skill level won't weigh heavily on whether you're accepted or not, just on how much mandatory training you receive.

There are a few things that you can do to increase your chances of being approved:

• Get involved in the community. The Galactic Hub is active on most social media platforms, however Reddit and Discord are the primary platforms used. You will need a discord account to participate in the GHDF. We're looking for passionate No Man Sky players.

• Sign up to the census. We are more likely to accept applicants that reside in the Galactic Hub. We do check, so please ask a member of the Galactic Hub staff if you need assistance adding yourself on.

• Gain experience. We are looking for people willing to put in the time and effort. If you're a new player it may be worth waiting until you've been a part of the community for a few months. Whilst we train players, we do want to see a commitment from applicants to learn the basics.

• Don't be discouraged. Whilst the GHDF is the largest military force in the No Man's Sky universe, it also has the most stringent vetting procedures as well. Only a small percentage of applicants are accepted, and many are not on their first attempt. Consider the points above, and if you have any questions regarding your application contact the Head Security Officer MrJordanMurphy.

The GHDF is divided into a strict hierarchy. GHDF operatives are always expected to follow the orders of a higher-ranking operative.

Only the CIC, VCC, HSO or Admirals may issue promotions. All ranks can recommend promotions for any officer at least two ranks below their own. All Ranks are abbreviated and numbered, to make identification simple and quicker.

All new recruits are put through a rigorous training programme with senior officers, to make sure that they are able to effectively neutralise any threats.

All platforms follow the guidelines laid out in the training manual, created by the training specialists. The training deals with all areas of engagement including ship and ground combat, as well as extreme weather survival. With each update, all areas of combat are tested to make sure that the GHDF is up to date on all weapon damage stats.

The GHDF also has Tech Specialists, that continually experiment on multi-tool and ship technology. This allows the GHDF to operate with the best technology when answering distress calls. All officers are supported with advice on how to improve their equipment's potential, so that they can reach theirs.

All officers activities are monitored and logged by the personnel specialist. This allows Senior Officers to recognise the achievements and milestones reached by all new recruits. It also allows support to be given to those who may need it.

The GHDF have 5 possible Terms of Engagement (ToE) tiers, which are applied depending on the current security climate in the Galactic Hub. Unless you have reason to believe otherwise, such as direct communication from a higher ranking operative, always assume that the GHDF is operating on the Atlas ToE.

If a player is not on this list, they can be assumed not to be a member of the GHDF.