The Galactic Hub Census routinely reaches hundreds of registered members and is reset with each major update (ie Atlas Rises, Beyond, and Origins).

The glyphs to Owdzangm XV are listed below.

See Interloper's Handbook - Guide to the Galactic Hub for further guides on how to reach the Hub, how to contribute to the Hub, customs of Hub life, and more.

Colonies are systems (or often smaller areas, such as a single planet or even a single island) where multiple players have created bases. The Galactic Hub's largest colonies are official colonies - colonies officially sponsored by the Hub staff - but a number of smaller, unofficial colonies also exist. Any Hub citizen is welcome to start their own colony.

If any Production Bases are visited and cannot be located, please message the listed architect. If they do not reply for weeks, or reply and indicate they demolished/removed the base, please remove it from the list below.

Polo's Picks are a series of S-Class multi-tools located by hollyvalero in the Galactic Hub or Hubble Zone. Sources are included for further information (some have special reload requirements, etc).

The process of requesting a Service is as follows:

If you can think of a Service role which is not currently supported, please suggest it to 7101334. Not all suggestions will be applied, but they will all be discussed by the Council.

How to Register for / Retire from a Service Role

Services are handled through the Galactic Hub Discord. After joining the Discord, navigate to the "#bots" channel, and post the command associated with the role (from the list below) in the chat. Your role will automatically be assigned, and you will be notified whenever someone posts in the "#trades-and-services" channel requesting help from your role. You may sign up for multiple roles.

If you want to retire from a Service, ask any Discord Moderator (Sentinel) to remove your role.

Service may be paid for in a variety of ways.

The Galactic Hub is directed primarily by Founder / Director 7101334, who is advised by the Galactic Hub Council. Euclid Director AndyKrycek6 acts as second in command, followed by Security Director MrJordanMurphy. Post-Euclid Directors (leaders of Galactic Hub Hilbert, Calypso, Budullangr, & Eissentam) have near-complete authority over their civilizations, with some exceptions such as coordinates, naming guidelines, use of subreddit/wiki, and emblem. Individual organizations are technically overseen by 7101334 but, in practice, mostly autonomous after they are established.

The Galactic Hub is a founding member of the United Federation of Travelers alliance, a longstanding alliance of most of No Man's Sky's largest civilizations. Since the Federation was established, the Galactic Hub's Ambassadors have been some of the more active participants. Through the Federation, the Hub has expanded ties with groups like the Alliance of Galactic Travellers and Cafe 42, two of the other largest civilizations in-game.

The Galactic Hub, AGT, and Cafe 42, the three largest civilizations in the game, are all based in or very close to this zone.

The Galactic Hub extends certain benefits to civilizations which are either Federation members or located in the Hubble Zone:

"Chapters" are official organizations within the Galactic Hub which perform a specific function designed to benefit the community.

The Galactic Hub Defense Force (GHDF) is a GH chapter dedicated to policing the Galactic Hub, maintaining peace outside the Hub as appropriate (particularly during weekend events and at crucial update sites like the Living Ship planet), and occasionally intelligence gathering or other military applications. Lead by Head Security Officer MrJordanMurphy, the GHDF has gained both widespread fame among the legitimate community and infamy among trolls and would-be disruptors. GHDF Officers have official uniforms, training events, private communications channels, and more to facilitate their peacekeeping mission.

GHDF membership is strict. Generally, only well-established members of the Galactic Hub community are accepted as Officers. 450+ have applied but only ~110 have been accepted.

(Note that the GHDF and Galactic Hub Security Office are distinct and separate organizations, although there is collaboration.)

The Galactic Hub Exobiology Corps (GHEC) is a GH chapter dedicated to exploration, discovery, and documentation of fauna, with a particular focus on rare species within the Galactic Hub's borders. Lead by Chief Research Officer Phaedrus29, the GHEC has already thoroughly documented many species and furthered scientific understanding of fauna in general (such as with this post on r/NMS_Academia).

The Galactic Hub Geological Surveyors (GHGS) is a GH chapter dedicated to locating S or A-class hotspots, mineral deposits, and gas clouds within the Galactic Hub. Lead by LtGing, THE_PILOT_HAZE, and AkimaPrime, their work will be of direct and immediate benefit to the formation of new mining sites, colonies, individual player bases, and more.

The Galactic Hub Ship Hunters (GHSH) is a GH chapter dedicated to exploration, discovery, and documentation of starships, freighters and multitools. Lead by Brigantine ApexFatality, the GHSH continues a longstanding tradition in the Galactic Hub of locating and documenting desirable possessions for other players. In this, they are the successors to one of the oldest benefits of the Galactic Hub, one which predates any sort of "conventional" multiplayer features.

The Galactic Hub Star League (or just Star League for short) is the competitive simulation sports organization sponsored by the Galactic Hub, lead by Kaboom443. "Simulation Sports" is the umbrella category for any form of live-multiplayer or time-trial-based competitive event in No Man's Sky, such as mutually-agreed-upon player-versus-player (PVP) battles, exocraft racing, on-foot racing, starship battles, and many other possible events. Star League events are hosted in Normal mode on all platforms.

Note that all previously listed Staff are also members of the Council. 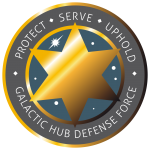