From No Man's Sky Wiki
Jump to: navigation, search
The subject of this article is from the Atlas Rises update.
The information from this article is up-to-date as of 23 July, 2018.
This page fills the role of Embassy for the Galactic Hub Project Civilized space community.
The information found here represents a user-created civilization hub that is a creative addition to the game.

The Galactic Hub Project, generally referred to just as the Galactic Hub, is one of the largest and oldest civilizations in No Man's Sky. The civilization's focus is primarily on documenting and sharing in-game content, but the community also creates visual art, lore, videos, 3rd-party technology, and more.

The civilization is defined by its size, focus on documentation / sharing content, and excellent community. Various well-known NMS players, like Pilgrim Star Path creator Pahefu and NMS YouTuber CobraTV, are members of the Galactic Hub community. Members of the community, or people on their way to the Hub, are known as Interlopers. We've adopted the possibly-insulting, much-beloved Vy'keen phrase as our own. 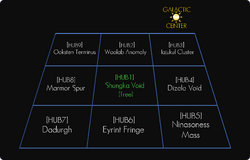 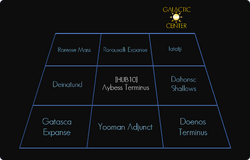 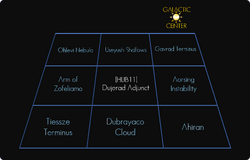 The civilization occupies 11 regions, located approximately 665,000 light-years from the Center of Euclid.

Originally created to explore a single region, the Rentocnii Conflux (formerly Rentocniijik Expanse), it eventually expanded into 11 regions total. Individual players and offshoot civilizations expanded unofficially into many more "Huburb" regions. After Update 1.30, the entire civilization was relocated to the Shungka Void and 10 other regions.

The Galactic Hub uses specific naming guidelines in-game. Names created using these guidelines mark the system as Galactic Hub space, and can share a variety of important information in a small number of characters. Such names can be very useful to other Interlopers.

Navigating to & Living in the Galactic Hub[edit | edit source]

See Interloper's Handbook - Guide to the Galactic Hub for a guide on how to reach the Hub, how to contribute to the Hub, customs of Hub life, and more.

HUB1-!$-1D TopOfTheTree2 is our Port System, the solar system where players may claim a base after using a Portal without considering if there's already a base in the system.

Standard Farms are farms designed to produce a specific product, such as Circuit Boards, Living Glass, or Liquid Explosives. Depot Farms are farms designed to produce only a single crop, usually by taking advantage of outdoor, biome-specific farming (may sometimes include small quantities of other crops as well). Gas Refineries are buildings filled with Atmosphere Harvesters, which produce Nitrogen, Radon, and Sulphurine, primarily for use in high-end crafting.

Note that Portal Addresses have been generated directly from coordinates, meaning you will end up in the right system, but possibly on the wrong planet. Farms also may not be located near Portals - if so, use Portals just to mark the system, then warp there in your starship from within Hub space. Never claim a base in an already-occupied system!

See Travellers and Glyphs in the Galactic Hub.

This section primarily refers to events or locations where you can actually see the so-called "glitches" of other players, the floating orbs which represent their position. User-generated content like bases, while technically "multiplayer content," are covered elsewhere on this page.

In the Renaissance Cup, players competed (both in real-time and on record-based leaderboards) for real-world prizes like Galactic Hub Trophies and Pins.

The Galactic Hub Mission Board is inspired by the in-game Mission Board, except the missions are written by fellow players instead of the game itself. See that page for more information.

Players can gain levels by completing missions on the Mission Board. You can update your current level on the Interloper Census and the Subreddit. Participation in the Level System is optional/voluntary.

See the Mission Board system for more detailed information. 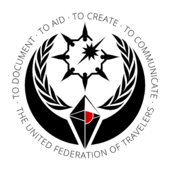 The Galactic Hub is a founding civilization in the United Federation of Travelers. We assist and cooperate with all civilizations, but will always prioritize fellow Federation civilizations. Historically, we have a close alliance with No Man's Sky Love and the Deep Thought Collective.

All the emblems of the Galactic Hub Project. (Image by AndyKrycek6, original emblem artwork by morgvom_org.)

Galactic Hub Hilbert is an extension of the Galactic Hub Project into the Hilbert Dimension galaxy, the second galaxy in the universe (after Euclid). The original Galactic Hub Hilbert effort, pre-Atlas Rises, was led by pahefu, creator of the Pilgrim Star Path app and major participant in the Euclid Galactic Hub. The current effort is being led by oo0oo & 8blacksheep8, both in the relocating and re-establishment (via Community_Farms) of the Hilbert Hub using the post-Atlas Rises coordinates.

Galactic Hub Calypso is an extension of the Galactic Hub Project into the Calypso galaxy, the third galaxy in the universe (after Hilbert). We are currently seeking leaders for this effort on both PC and PS4.

Galactic Hub Budullangr is an extension of the Galactic Hub Project into the Budullangr galaxy, the seventh galaxy in the universe (after Ickjamatew). We are currently seeking leaders for this effort on both PC and PS4.

Galactic Hub Eissentam is an extension of the Galactic Hub Project founded after Update 1.30 in the 10th galaxy Eissentam, also known as the first Tranquil galaxy. The effort is being led by jmillgraphics (Reddit / PS4).

The Galactic Hub Council is a group of players formed with the intention of advising the Hub's founder on how to manage the Galactic Hub, new policies, new events, and more.

The Council's first primary purpose was to help organize our move from Rentocniijik Expanse / Rentocnii Conflux into our current home region.

For a full list of Council members, see the "Staff" section.

Embassy Systems are single systems claimed by the Galactic Hub in another civilization's space. Embassy systems have a few purposes:

Civilizations wishing to establish embassies within the Galactic Hub should locate them near HUB10-79 Tartarus Relay, the Black Hole for the Aybess Terminus.

Platform directors are responsible for assuring, as much as possible, that Galactic Hub content is consistent across all game platforms. This includes duties like coordinating major events, encouraging the use of naming guidelines, and naming major "landmark" stars in a consistent fashion across platforms.

Any images which don't require their own article (ie, fauna) and are not maps or navigational aids should be posted here.