This article is a stub. You can help No Man's Sky Wiki by expanding it.

The Galactic Trade Network is a galactic market that provides access terminals for local commerce in No Man's Sky. They maintain a galactic standard price (in units) for goods. Unlike alien traders whose prices fluctuate, goods bought and sold at their terminals are generally around the galactic standard.

The Galactic Trade Terminal is a stationary object most often found mounted to a wall in space stations, trading posts, and outposts, and can be used by the character to buy and sell items.

The character can sell items from their exosuit and starship unless their starship is too far away from the terminal.

The Galactic Trade Terminal is the last blueprint the player receives from their Construction Worker.

The prices in the galactic Trade Terminal may depend on the economy of the system , although they stay more around the standard than the lifeforms in the system 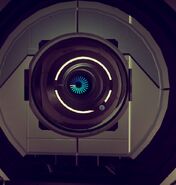 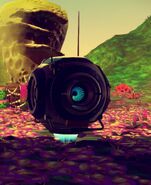 Free standing terminal
Add a photo to this gallery

Retrieved from "https://nomanssky.fandom.com/wiki/Galactic_Trade_Network?oldid=13269"
Community content is available under CC-BY-SA unless otherwise noted.