A Galactic Trade Terminal provides access to the Galactic Market. 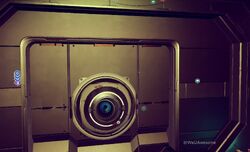 A Galactic Trade Terminal provides access to the Galactic Market; where a player can trade, sell, and purchase items.

Terminals of this type are found on space stations, and various Point of Interest locations on a planet. They provide quick electronic access to galactic markets where items of various types may be bought or sold on the open market.

Players can build these terminals on a base or freighter.

A trading terminal that provides instant local access to the market for resources and products.

A player may choose to interact with a terminal using the interaction button on their controller or keyboard. The first step is to choose whether to sell items to the network, or buy them from the network. Once this selection has been made, the items are displayed in a list. Switching target inventories, as well as buying and selling, can be done with the respective keybind displayed above the item list. For each item, the following details and functions are displayed:

If the cursor is moved over an item, a tooltip will display additional information about that item.

Every terminal will have these offerings:

The following goods will occasionally appear for sale in trade terminals.

Galactic Trade Terminal can be built using a blueprint and the following ingredients:

The blueprint can be learned by completing an Overseer quest, or purchased on Space Anomaly at the Construction Research Station.

Prices of a product will decrease if you sell to a terminal, and then slowly return to normal. They will not change if you buy, or if you sell to a pilot NPC at a space station or a trading post.

Crashing a market involves selling large amounts of any material or trade commodity and buying it back at the prices reduced up to 80%. The best commodity to use for crashing a market is by far Cobalt. At ~200 units per item it is valuable enough, and every Space station sells it. This is important, because you can only buy back the commodity that a current terminal sells. The big advantage of Cobalt is that you can mine sufficient amount to start market crashing in caves on your starting planet. 2,000 is the minimum amount recommended, although you will have some gains from as little as 1,000. When the Cobalt amount at your disposal increases to 10,000 (one full stack), you will get ~1.6M

by selling this stack and buying it back.

After the Star system market is crashed, you may be able to buy additional amounts of Cobalt from NPCs landing in the Space station. By quickly jumping between Space stations and crashing the Cobalt market it is possible to earn up to 4 billion

in less than 24 hours of game time, and completely upgrade your Exosuit storage at the same time. Adding other high value materials (Gold, Silver, Platinum, Ionised Cobalt, and Chlorine) to your inventory can further increase the profits, but these can only be sold at the station that already sell them.