The Galactic Trading Company (GTC) is a company.

The Galactic Trading Company (GTC) is a company in No Man's Sky that is led and owned by the founder fd_df.

It is based in the (GTC_KMin1) Rebinkan system of the Alpha Quadrant and operates all over the Euclid galaxy, currently managing 14 outposts - 12 already recorded - in 6 regions for business activities.

The GTC has focused on the areas of science and profit, with further specializations within the areas. Within science these lie on agronomy, gas harvesting and exploration. In the profit segment, trading in agricultural products and trade items on the Galactic Trade Terminals is the main business. The science section has internally a special status in the GTC and is called the GTC Science Division (GTCS). The GTC represents all activities of the GTC and GTCS.

The founder's ancestors were founding members of a terrestrial trading company that explored and traded different cultures. Over the years a trading power developed - with ups and downs - which disintegrated after several centuries because of wars and political issues. History has been passed down from generation to generation and it has always been the principles of science and trading that have been handed down.

With the opening up of space, the founder of the GTC set out to spread these principles.

The founder was an interloper from the beginning of interlopers. He started his way looking for rare metals to sold, made a few million units to start the endless expedition through the galaxy. The time went by and a new carrier as farmer occurred. While the first acid production of its kind made him a wealthy interloper and got him his own giant freighter for greater expeditions, he became a farming expert with high developed products. From this point the expanding of its farming activity was one of the main activities from day to day and he was discovering more and more but still knowing so less of the Euclid galaxy.

The continues expanding in the science sector with the Atmospheric Science Center enabled the founder to create new products with gas and build up a bigger production to finance his expeditions. The ongoing professionalization let to the formation of the Galactic Trading Company between the terrestrial spring and summer of 2019. The company defined a naming guideline for new systems to track its activity in the Euclid galaxy.

The GTC and its Science Division have tasks concerning its daily business. There are additionally services provided to other individuals that are based on the daily business.

All activities of the GTCS are managed from its HQ. The following activities are examples for the daily business:

Due to the strategic objectives of the GTCS, the focus in discovering new systems lies on high wealth systems with a large supply of resources.

The farming service is provided by the Research Alpha outposts of the GTCS. Generally these outposts are pick-your-own farms for everybody, if you got the necessary time. For all other interlopers there is the premium farming service that is a hybrid service with the resource suply. The GTCS will harvest the ammount of crops needed in exchange for a payment.

In addition to the farming resource supply the GTC is providing resources in great amounts - these can be building materials or other stuff.

As a result of the mentioned services, a combination leads to the complete farm projection including the resources for the buildings and the crops. Just send a propose and the GTC will check for the viability.

Chief Executive Officer - The CEO of the GTC is overseeing all company operations of the GTC and the GTCS.

Chief Operating Officer - The COO of the GTC is second in command concerning the GTC activities.

Chief Research Officer - The CRO of the GTC is second in command concerning the GTCS activities.

Every interloper who wish to contribute to the GTC is appreciated. Just send a message to the CEO of the company to ask him for a job vacancy. You can state which position you want to fulfill or which position should be established.

Company headquarters are called Galactic Trading Port and located in the The Arm of Omsomo region of the Euclid galaxy.

The GTCS has its own headquarters that are called Atmospheric Science Center and located in the Bildbie region of the Euclid galaxy.

The GTC claims the following two regions as its capital regions:

Further company branch locations can be found in these regions of the Alpha Quadrant:

All mentioned regions are close to another and can be considered as neigbour regions.

The GTCS is operating outposts from the time before the foundation was done. They are no longer used for corporate activities, but only for experimental and nostalgic purposes. They are open to all GTC employees and every other interloper to conduct their own research.

With a full collection and harvest of the GTCs raw materials, we are producing over 150 stasis devices.

The GTCS has central research outposts, where they are searching for new possibilities to use the crops and local gas. The outposts function as Depot Farms for the local crops. Currently there is one Research Alpha outpost for every biome:

The company has expanded in the field of gas extraction and established three industrialized sites in the (GTC_KMin1) Rebinkan system. The sites have made it possible to extract large quantities of gas.

GTC Enterprise surrounding the capital planet of the GTC.

Every operation or expedition is supported by the GTC Enterprise (GTCE) - the capital freighter of the GTC - and its fleet. The GTCE is providing resources for short-term bottlenecks and possibilities to refine materials for further usage. It is possible to access every storage container through the cargo area.

In addition to the support of planetary operations and expeditios, the GTCE is the operations center for expeditions concerning the fleet.

The GTC is represented by the two achromatic colours white and grey. As a further distinguishing feature, accents or highlights are set in dark red. The GTC currently has a logo, a flag, an in-game flag/banner combination and other tags as part of its corporate design for uniform representation. The corporate design is an own creation based on the historic British East India Company.

The GTC Logo is the official identity mark of the GTC and all its activity. 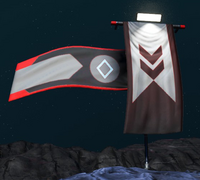 The GTC Flag represents the official flag that is used by the GTC and its employees. In addition there is an in-game flag/banner combination that is harmonised with the Federation Vexillology Department.

The GTC Tags are used to mark something as property of the GTC besides the logo. It is available in the three GTC colours.

The GTC is open for partnerships with other companies, civilizations or alliances. The CEO will start to build up a network to encourage the standing of the GTC in the No Man's Sky universe. 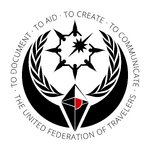 The GTC has joined the United Federation of Travelers alliance on August 31, 2019 as a proud member. The Federation is one of No Man's Sky most longstanding and largest civilizations.

There is currently no official connection between the GTC and the Galactic Hub Project except the registration of the CEO in the census. There is a representative outpost under construction on the planet Orgete Aioik in HUB10-6A Quetzalcoatl's Sun.

Since the professionalization of the field of exploration, all discovered systems are to be named after the GTC Guideline and equipped with an index. The Index includes the information about the company, domestic faction, economy type and wealth of the system.

The partial index for the Faction is the first letter.

The partial index for the Economy are the first three letters of the type.

The partial index for the wealth is in three stages.

The home system of the GTC is used as an example for the naming guideline. The system Rebinkan is a Korvax system (K) with the economy Minerals which is in the Mining type (Min) and Affluent wealth which is high (1).

The resulting index with the company information is GTC_KMin1 and is combined with the system to (GTC_KMin1) Rebinkan. The following new name of a system can be whatever a friendly interloper want to choose. Due to an issue concerning the documentation, in-game there are used square brackets and in the wiki round brackets.

Currently the GTC sees no need to indicate the Conflict Level of a system.