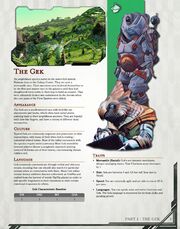 The Gek are one of the three primary sentient species in the No Man's Sky universe.

Gek staring at stock market updates on his tablet

An amphibious species native to the water-rich system Balaron close to the Galaxy Centre. They are now a mercantile race. Their ancestors once believed themselves to be the first and master race in the galaxies until they had slaughtered every entity in their way to build an empire. They were ultimately beaten into submission by the Aerons (sentinels) when the core junta of Gek the First Spawns were killed.

Along with the Korvax and Vy'keen, they are one of the last three remaining sentient species in the Euclid galaxy.

The Gek are a small-statured race with bird-like eye placements and beaks, which often have metal plates, pointing back to their amphibious ancestry. They are bipedal with claw-like fingers, and have a variety of different head accessories.

Typical Gek are commonly corporate and plutocratic in their mannerisms, with many of their titles tied to trading / industrial related terms. Most of the initial encounters with the species require units (currency). Most Gek monoliths demand players choose a pragmatic approach (putting tortured lifeforms out of their misery, exterminating distant entities etc). 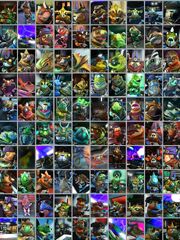 Gek commonly communicate through verbal and olfactory means, meaning that one should also watch for particular aromas when in conversation with them. Many Gek utilize certain dietary additives (known collectively as GekNip and crafted from the harvest of weedy NipNip plants) in order to add specific fragrances to their emissions to elicit certain emotional responses in others.

Should players discover new words and wish to contribute to this wiki please visit Gek (language research) to fill in the blanks.

The Gek each possess a title indicating their status within their society's hierarchy. Known titles include:

See Scripts of the Gek

Gek Monoliths dot the landscape of many systems.

Often the explorer is given a choice whose outcome is contingent upon Gek morals. A positive reaction will bolster your reputation among the Gek and often produce a reward and a greater understanding of the Atlas language. Artifacts are common gifts from positive monolith interactions while upgraded weapons are rare. A negative reaction may injure the explorer, and drastically hurt their reputation with the Gek.

The Gek plaques provide an understanding that the Gek were once an arrogant and blood-thirsty primal master race known as the Gek the First Spawns. They had many rituals designed to conquer the universe and harness its resources for themselves. The Gek Dominion swooped through the universe with blitzkrieg tactics and invaded everywhere at ease and nearly eliminated the entire population of Korvax Prime, causing the The Great Disconnection.

From ruins constructed by the Gek, it was learned that they were biding their time to defeat the Vy'keen Alliance quickly, as the Vy'keen and the Sentinels clashed against one another in The Aerons War. During this time, the First Spawns of the Gek were enslaving a majority of the young Korvax in an act of "Mercy". Fresh Korvax were put into horrific conditions of slavery, abused and neglected. When more of the Korvax died, bodies were refused a return to the remaining Korvax colony planets; instead Gek the First Spawns stripped their bodies down and melted them into more equipment for their war efforts.

The player can gain reputation based on successful interactions with the Gek, by assisting a distressed Gek, or by reporting some Gek white-collar crimes. Note that lower reputation can result in fewer opportunities to increase standing. The following list is outdated and needs an update

Reputation ranks with the Gek include, from low to high:

Member of the Gek race