From No Man's Sky Wiki
Jump to: navigation, search
The subject of this article is from the Beyond update.
The information from this article is up-to-date as of 27 November, 2019.

Hazardous Flora is a type of flora.

Hazardous Flora is a type of flora that reacts to the presence of the player. They don't show up on planetary scans but they can be revealed with Analysis Visor and will be indicated with

Their poison is extremely toxic and can incapacitate a traveller quickly without proper protection. Destroying them will not alert sentinels.

Tentacle Plant is known for its whipping, poisonous attack. It is classified as flora, can be scanned, and will show up in the discoveries with a randomised name.

They are scattered abundantly on planet surfaces where flora is present and have an attack range of about two meters. Damage will occur to the player whether they are on foot or inside an Exocraft vehicle. They provide Oxygen when destroyed with the Multi-tool, but remain unharmed if driven over.

Some may even take root in the ceilings of Abandoned Buildings. 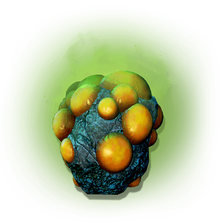 Underground Toxic Hazard is known for its pulsating, poisonous attack. It is not classified as flora, therefore it cannot be scanned.

They can be found in caves and 8-14 units of Oxygen or Sodium can be harvested from them. It requires Haz-Mat Gauntlet and can be done from a safe distance, without taking any damage.

Destroying them with the Multi-tool yield the same amount of resources.

It is advised to use the Torch as they can blend in the environment, their texture only changes when the player looks directly at them. A red glow makes it more apparent.

Carnivorous Trap Plant is classified as flora, can be scanned, and will show up in the discoveries with a randomised name.

It can be harvested for Oxygen with Multi-tool as all hazardous flora can. Getting too close to it, the plant's open mouth will snap shut and injures the player.

Bloated Gas Flora are classified as flora, can be scanned, and will show up in the discoveries with a randomised name.

Getting too close to it will result in the flora's upper part starting to bloat, ending in an explosive burst of gas. This can injure the player if they remain in the flora's vicinity.

Three Gassy Pods can be found on the outside of these plants. These pods can be harvested to yield more Oxygen than just normally destroying it.

These pods can be identified by the red sacs on the outside of the plant. They are more visible at night as they glow.

This method is dangerous as you have to get close enough to the plant to harvest the pods.

The stem, leaves, and growth form change from planet to planet. There is only one species of Tentacle Plant per planet. The leaves on the base appear to be always the same.