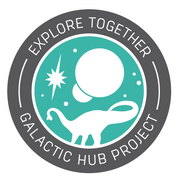 "We are a way for the cosmos to know itself." - Carl Sagan

To the players, the Travellers, the Interlopers, this universe exists in a peculiar state; it's not truly real until we witness it. Although the native races are everywhere, they don't upload their knowledge to any accessible data banks. The "known" of Euclid, Hilbert, and beyond comes solely from the players: untold numbers of systems and planets discovered, magnificent fauna, powerful multitools, shared bases, and more. The "unknown," on the other hand, is mostly just that: a vague, dark concept full of potential.

The Galactic Hub exists, above all else, to tap into the potential of "unknown" space and add it to the ever-growing library of the "known." Close proximity to hundreds of other players allow you to quickly and easily access these discoveries, as well as the other benefits listed on the Galactic Hub Project page.

This guide exists to help Lone Travelers adapt to life as Interlopers, citizens of the Galactic Hub. As likely the largest civilization in No Man's Sky, there are many levels to, tips for, and ideal practices for life within Galactic Hub space.

See Interloper's Guide to the Galaxy - Complete Guide to NMS for a similar guide with a focus on all of No Man's Sky.

For general information - in-game content, explanation of the basic concept, "best of the Hub," and more - see the Galactic Hub Project page. This guide is not to explain the Hub, as much as a guide on "How to Hub."

The Galactic Hub has a small number of customs which keep the community together and relatively peaceful.

Navigating to the Hub[]

The Galactic Hub occupies 11 regions including and surrounding The Arm of Vezitinen in the center. The regions connected to the regions immediately above and below the Arm of Vezitinen are not considered part of the Hub civilization proper (though they are often referred to in the local vernacular as the "Huburbs.")

Currently, there are three ways.

(Recommended way for those who have unlocked all of their Portal Glyphs.)

With the removal of Portal Interference with the Origins Update, players can now use portals to permanently travel anywhere inside their current galaxy.

(Recommended way for those who haven't unlocked all of their Portal Glyphs.)

With the addition of multiplayer and the party system with the NEXT update, players can reach a location just by joining on another player.

After joining on the other player, you can permanently set your new location by creating both an autosave and manual save, or establishing a teleporter connection somewhere in the system (at the space station by exiting the system via warp engine, by visiting another player's base, or by claiming a base of your own).

The popular HUber service allows players to effectively catch a ride to the Hub. HUber rides can be requested in the #trades-and-services section of the Galactic Hub Discord after selecting a role in #role-select. See Galactic Hub Project - Services for more information.

(The old way, not for the faint of heart!)

This section applies to warp engine travel using either standard Starship warp engines or Freighter warp engines. The technique is the same for both.

This is the classic means of traveling to the Hub, and how most people have reached us.

1) Build a Signal Booster by pressing up on the D-Pad, or PC equivalent, and opening the Build Menu.

2) Walk up to / hover over your Signal Booster, or interact with it. You will see a four-or-five-letter "word" followed by a string of coordinates, which will look something like

3) The four-or-five-letter "word" is useless; ignore it. Enter the coordinates into Pilgrim Star Path.

4) Use Pilgrim Path to navigate to the Galactic Hub based on the directions given, explained in the step above.

5) Once you get within 1 jump away, you may be able to use the in-game "Scan for Discoveries" feature on the Galactic Map to locate the Hub.

6) You can also try using "Local Mode" on Pilgrim Star Path by clicking the button on the upper right-hand side of the Map tab. In Local Mode, you can judge differences within a very small area of space. If you're still too far from the Hub though, it won't show up on the Local Mode map.

The Distance and Route Calculator (DARC) by huskerbsg can significantly reduce the number of warps for journeys not heading directly towards or away from the Center. It is used similarly to Pilgrim Star Path, the primary difference being the DARC is focused more on the available Black Holes while Pilgrim Star Path is focused more on how to reach them. The DARC website also includes a guide.

Navigating within the Hub[]

In addition to being provided with clear directions from another player as outlined in Providing Useful Directions section, the easiest way to travel within the Hub is using Portals. If you need to build a base or otherwise avoid Portal Interference, you can still use a Portal to travel quickly - step through, set a waypoint, return through the Portal, and warp there without any problem finding it on the Galaxy Map. The game has no problem setting a system as a waypoint even when you are already in that system.

For this purpose, it's important to know how to convert primary Hub tags ([HUBn-###]) into actual coordinates. You can then use Pilgrim Star Path to convert the coordinates into Portal Addresses.

What to Do Once You Reach the Hub[]

If you've followed the techniques above to reach the Hub: welcome to the Galactic Hub, Interloper! Hopefully it will be your new home, a valuable trading stop, an entertaining tourist trek, or whatever you came here hoping it would be.

Before you begin exploring, naming systems, and generally utilizing the Hub, there are a few things you should do.

IMPORTANT: Register on the Interloper Census![]

The Interloper Census is our only way of knowing how large the Galactic Hub's population is, and can be very helpful to other players. In the past, only an estimated 30% or less of Hub residents signed up for the Census. The new Hub can do better! Please sign up as soon as you enter Galactic Hub space; if you wait until later, it's a very easy thing to forget.

You do not need a base in the Galactic Hub to register, you only need to have reached Galactic Hub space. However, if you do have a base or multiple bases within the Hub, please include them!

Directions on how to sign up for the Interloper Census are available on the census page. If you are on mobile and have difficulty editing the page to add yourself, just send your information to any Galactic Hub Subreddit Moderator. (See "Staff" section of main Galactic Hub Project page, or sidebar of subreddit.)

Optional: Add a "Hub Badge" to Your User Flair (Subreddit)[]

Galactic Hub Flairs allow players to showcase accomplishments, status, and other facts about their "career" as a Galactic Hub Interloper next to their username on the subreddit. One of these is the "Hub Badge," which simply signifies that a player has reached the Hub.

If you qualify for this flair or any others, please message subreddit moderator DesignationG to have them assigned.

Sharing useful directions is important if you want other people to be able to benefit from your discoveries. Good practices include:

There are a number of useful tips for locating a solar system within Hub space.

See the Locating Multitools section of the Guide to the Galaxy.

Let's say someone followed the directions above and shared a system with a powerful multitool. How would you find it? There are two scenarios.

If there is a specific "multitool box" marked with a Communications Station, it can make the multitool much easier to find. Some boxes appear to always give the same model - very good news if it gives an S-Class Alien or Experimental multitool.

Other boxes will give a small pool of multitools. Leaving and re-entering the planet's atmosphere should cause the multitool to "re-roll" in this scenario, but sometimes they may get stuck.

Unmarked - Finding It On Your Own[]

If there is no specific multitool box marked by a Comm Station, you still have a decent shot at finding it.

Perhaps someone has posted a Starship you would like to purchase or salvage. Unlike multitools, this process is pretty straightforward: once you find the system, the best place to shop for a new ship is a Trading Post on a planet.

There are three primary ways to locate a Trade Post

If the desired ship is a Crashed Ship marked with a Communications Station, simply fly around and check Comm Station markers until you locate your target.

Colonies are organized settlements of multiple players within the Galactic Hub. Some colonies may have themes, while others are just collections of multiple users.

The Galactic Hub's capital colony, New Lennon, is its first colony and most populated.

The Galactic Hub Subreddit, r/NMSGalacticHub, is our main social platform, as well as a means of sharing discoveries, personal logs / lore, screenshots, information, wiki articles, and more. Although you don't need to participate in or even read the Subreddit to be a member of the Galactic Hub, that's our primary official outlet besides the Wiki.

Browsing the subreddit on default mobile will significantly limit its functionality, and not all of the information below will apply. It's recommended you either select "Request Desktop Version" (or similar option) in your mobile browser's settings, or download a Reddit browsing app that allows you to see flairs and user flairs. One recommended app is the Boost Reddit app, which will allow user and link flairs to be seen.

To create a new post, click "Submit Link" or "Submit Text" on the right-hand side of the subreddit, under the sidebar image. Detailed posting rules are included on the submission page, but essential points are:

Under the "Filter" section of the drop-down menu, you can select galaxy-based filters for Hilbert, Calypso, Budullangr, and Eissentam Galactic Hubs, or "Flair Search".

After selecting "Flair Search," replace the "REPLACE WITH DESIRED FLAIR" text with the flair you want to search, like "Starship" if you want to see all posts tagged with "Starship".

If you qualify for any badge or award, just ask a moderator to include it in your user title. You can add your Hub Badge without asking a mod.

For a general guide to No Man's Sky, see Interloper's Guide to the Galaxy - Complete Guide to NMS.