Irangbia VI is a star system in No Man's Sky.

Irangbia VI is a star system in the No Man's Sky universe. It is a Ternary Star System; possessing a purple star, green star, and yellow star. The Yellow star is the main star.

By PC explorer Green-Guy Geno on 23 Sep 2020. It was explored and a claim documented by Alliance of Galactic Travellers. This system is part of the AGT. 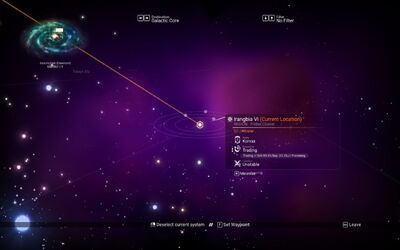