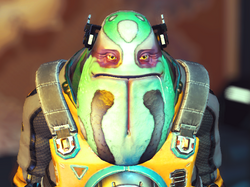 Iteration Cronus is an NPC.

Iteration Cronus is a Traveller that can be found in the Space Anomaly, and is the resident chef.

for any food sample presented. Higher end foods tend to get higher scores.

Cronus has been described as a "temperamental food critic." One of their top-rated foods is Herb-Encrusted Flesh.

A Silicone/biological helmet with the appearance of Iteration Cronus may be purchased from the Quicksilver Synthesis Companion.