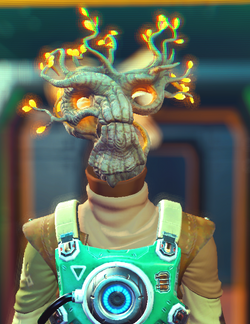 Iteration Helios is an NPC.

Iteration Helios is a Traveller that can be found in the Space Anomaly.

Their appearance depicts a tree-like creature with a sort of aura around the head, possibly serving as a brain.

This traveller has been referred to as "the ancient dreamer."

A Silicone/biological helmet with the appearance of Iteration Helios may be purchased from the Quicksilver Synthesis Companion.