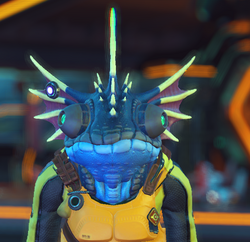 Iteration Tethys is an NPC.

Iteration Tethys is a Traveller that can be found in the Space Anomaly.

Tethys possesses a very fish-like look, encompassing beady eyes, scaly skin and fin-like structures on the head which probably serve as substitute ears. Their appearance is somewhat similar to the Gek, actually so much so that Tethys tries to pass off as a Gek by using perfume the first time you meet them.

When Tethys is first met they will try to scam the player out of a few units by pretending to be a Gek using their fish/lizard appearance and perfume to fool the player (unsuccessfully). 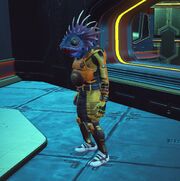 A Silicone/biological helmet with the appearance of Iteration Tethys may be purchased from the Quicksilver Synthesis Companion.