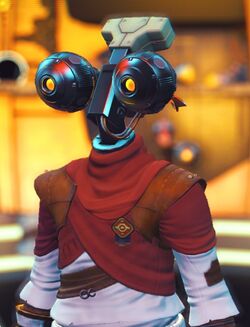 Quicksilver Synthesis Companion is an NPC.

Quicksilver Synthesis Companion is a merchant NPC, who resides in the Space Anomaly, and offers exotic items in exchange for Quicksilver.

This NPC is also referred as the Q.S.C. or by the nickname "Quincy" (by players, not in-game text).

Specialist Polo made the following comment about its creation: A being fashioned from metal and soul, by my own paws!

Master Polo has instructed me to assist you and all Travellers in the process of creation.

Your desires have been studied and fed into my synthesis routines. Observe the output!

It has a separate room aboard the Space Anomaly