From No Man's Sky Wiki
Jump to: navigation, search
The subject of this article is from the Pathfinder update.
The information from this article is up-to-date as of 10 August, 2017. 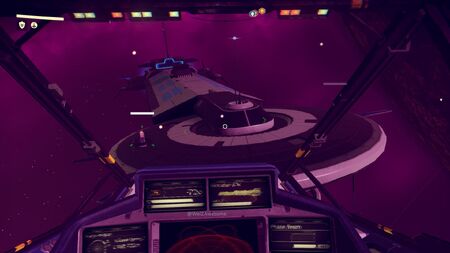 Space Fleets are neutral stationary star ships that reside in space within star systems, often allied with certain alien race such as the Gek, Vy'keen or Korvax. They are protected by fighter ships that only spawn when a player decides to steal resources from their cargo bays. Space Fleets are enormous rectangular ships that often travel in groups of 3-6 ships. Currently, only Cargo Fleets exist.

When a Space Fleet is under attack, a distress call will be send out immediately to fighter starships which spawn almost immediately; the number of ships appears to grow at an exponential rate.

Please clarify the following: but this seems to be incomplete that it would disappear on its own along with ships released by it if stars disappeared in next few seconds.

A player's standing with certain alien lifeforms will greatly decrease, depending on which lifeforms the Space Fleet is associated with.

A variety of resources can be gathered from destroyed cargo bays; a player may even find exotic elements. Here are some known resources that have been gathered from cargo ships: