Fauna can be fed to befriend them. The food needed to befriend an animal varies by species, but is usually easy to obtain on their native planet. One you befriend an animal you will be given the option to adopt or ride. Befriended fauna will occasionally give you Faecium or point out interesting features. Fauna can also be killed to obtain Mordite, and can be scanned after they've been killed. Hostile, aggressive fauna that are near the player are indicated by a red paw icon; they will attack and try to kill the player when in range. Can be distracted with food. 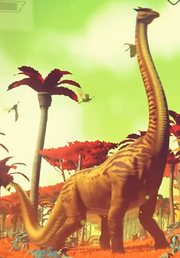