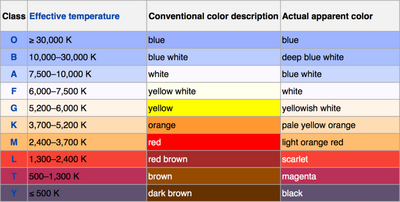 Spectral class is used as a method of categorizing stars.

All stars are assigned a spectral class, generally composed of three coded characters. For example, the pre-release star Ethaedair is listed with a spectral class of G2m. This indicates that it is one of the hotter yellow stars, and with enhanced metals.

In No Man's Sky, the colour of the star provides information ahead of time as to what life, resources, and other materials are likely to be found on the planets circling the particular star. In fact, some resources are found only in star systems of certain colours. (example: Indium is found only in blue star systems, classes O and B)

In the initial Atlas Rises release, Spectral Class was removed from the game. It was restored to the galaxy map text as part of the 1.38 update.

The following information is based on the stars in the Terran universe, but should give an idea of what may be seen in the game. Note that the Terran sun ranks as a G2V.

The first character is the star's class (listing Class, Temperature and Colour):

(Note: The Green Star Class does not exist in the Terran universe, but does in the NMS universe)

The second character provides a heat range within a specific class, where the lower the number, the hotter the star. For example, a star rated G3 would represent a warmer temperature than G8.

The third character indicates any oddities for the star. Note that entries referring to spectral lines or specific elements such as hydrogen would be distinctly different in the universe of No Man's Sky.

Based on the information above, the following stars have an apparent mismatch between their color and their spectral class: