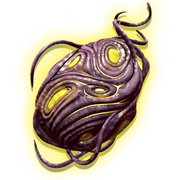 Starbirth is a mission page.

The Starbirth is a mission which is started after purchasing Void Egg from the Quicksilver Synthesis Companion. After the Space Encounter with a strange starship, Void Egg becomes active and produces a number of coordinates which the player must follow to learn new technologies and repeat a long-forgotten Korvax experiment.

I took aboard an egg from the Space Anomaly. Since then, a strange consciousness, a mind I cannot fathom, has impregnated itself within my starship.

It seeks a host, a fusion of life and machine, so it may have existence beyond the Echoes...

The strange egg I carry called out to another organism, a bizarre hybrid of starship and living being.

Void Egg becomes an Active Void Egg. It now hums a strange music, calling me towards a world of strange, haunted terrain and bizarre colours.

After acquiring a Void Egg from the Anomaly and travelling within any system, the traveller will experience a Space Encounter with a strange alien starship, and receive directions to a star system where approximate coordinates are received. The traveller has to explore the area to discover a Korvax plaque on the planet. At the Plaque the player is required to provide a Consciousness Bridge, and receives a blueprint required for building one, and directions to a Crashed Freighter where you can acquire the Hexite necessary to build it. After returning to the Plaque and the Consciousness Bridge provided, the player receives a Fragile Neural Stem which has to mature for 18 - 25 1/2 hours.

Void Egg becomes a Stirring Void Egg. It now hums a strange music, calling me towards a harsh world of dust, fire, and ice.

Once the Fragile Neural Stem matures into the Mature Neural Stem, the player will have another Space Encounter with a strange starship, and receive directions to a star system with an extreme Barren planet, where approximate coordinates are received. The traveller has to explore the area to discover another Korvax Plaque. At the Plaque the player is required to provide a Pulsating Core, the blueprint required for building one, and the Solar Ray blueprint. Liquid Sun required for building a Pulsating Core can be mined from metal deposits using Solar Ray. After the Pulsating Core is provided, the player receives a Fragile Heart which has to mature for 19 - 25 hours.

Void Egg becomes awakened. It now hums a strange music, calling me towards a paradise, a gentle world of life and water.

Once the Fragile Heart matures into the Mature Heart Node, the player will have another Space Encounter with a strange starship, and receive directions to a possibly abandoned star system with an extreme Lush planet, where a set of coordinates leading to another Korvax Plaque is received. At the Plaque the player is required to provide an Impossible Membrane, and the blueprint required for building one. Building an Impossible Membrane requires a Hypnotic Eye which can be obtained at the marked underwater Abandoned Building, and Living Water. To obtain Living Water the player has to return to space, and interact with a Child of Helios. After the Impossible Membrane is provided, the player receives a Fragile Shell which has to mature for 20 - 24 hours.

Void Egg becomes cracking. It now hums a strange music, filling my mind with images of a shifting planet, one minute a world of grass, the next a world of strange anomalies.

Once the Fragile Shell matures into the Hardened Shell, the player will have another Space Encounter with a strange starship, and receive directions to a star system with a Hydro Garden planet, where a set of approximate coordinates which have to be refined is received. However, the planet is not always a Hydro Garden planet. The coordinates become more accurate approaching the specified location and lead to a Boundary Failure. Here the player is required to provide Seeds of Glass, the blueprint required for building them, and the Animus Beam blueprint. Animus Beam has to be used on living beings to collect Fragmented Qualia required for building Seeds of Glass. After Seeds of Glass are provided, the player receives a Growing Singularity which has to mature for 18 - 24 hours.

Once the Growing Singularity matures into the Singularity Core, the player will have another Space Encounter with a strange starship, and receive Portal coordinates in Euclid: (NOTE: If you are not currently in the Euclid system, you will need to travel to Euclid before using the portal.)121905417A6B, address 026A:0084:0C16:0219, which lead to the star system Ischel-Althu, planet NMSCord Void Egg - Nyxara. On arrival the player receives coordinates (latitude/longitude -56.88, -159.20), which lead to an Abandoned Building. After interaction with the terminal the player receives a Soul Chamber which has to be filled in with souls of fallen Travellers, 3 souls are needed. Approximate coordinates for the next Traveller Grave are provided. The first coordinate is the same for all players (+4.13, +173.07), but the other two are randomly generated. After the Soul Chamber is full, it becomes Archived Soul, and the player has to return through the Portal.

WARNING: As soon as the third soul is collected, entering your spaceship will trigger the egg's hatching and give you a choice to hatch the egg or ignore. Make a manual save and follow the advice below.

In this situation, it is recommended that you make a manual save immediately (see reasoning below).

Once the player reenters the starship, a new communication is received giving your the choice to hatch the egg or ignore. If you choose to hatch a living ship will be generated in the current star system and you'll receive its location. It will be a Crashed Ship location, but instead of the regular Starship, it will have a Fallen Host Bio-ship. The player will then perform Biogenesis, providing a Mature Heart Node, Mature Neural Stem, Hardened Shell, Singularity Core, and Archived Soul. After that, the ship can be claimed as any other starship. (If it appears to be a normal damaged ship just leave the ship stats page and it should transform into a living ship in a few seconds). If the starship design or stats are not satisfactory reload your manual save, go to a different system via teleport or portal travel, and you'll get a new communication leading to a different Fallen Host in that system.