Back to page
Add topic

I've been lurking for some time and have taken the liberty of designing a new, hopefully more concise and informative galactic chart for use on this wiki. 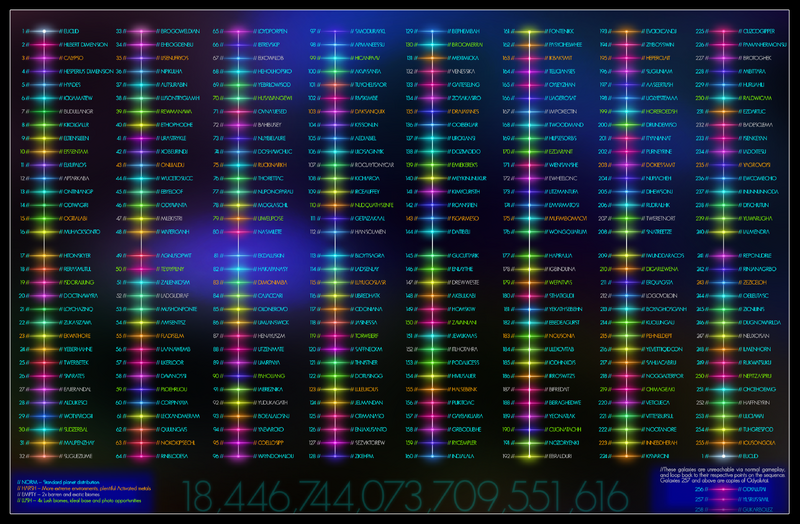 Any misspellings or misclassifications are welcome to point out.

EDIT: Added Odyulatai and touched up on the map key.

our admin team is evaluating this new version and will get back to you once we've taken a closer look. We'll keep you posted - thanks. Ddfairchildd (talk) 00:45, 12 June 2021 (UTC)

Traveling to next galaxy[]

The game doesn't give enough information on what happens after moving to the next galaxy. (It technically doesn't even mention that the "reset" option does this!) I think it's worth mentioning on the wiki that a few things happen:

There is the Center of the universe page with outdated info, but that is not linked from this page, which should be done in some way. Feel free to edit! Gorla (talk) 21:02, 17 August 2018 (UTC)

Comment to quote: "Player loses teleporter access to bases and space stations from the previous galaxy.", but in Galaxy_Centre#Cautions_for_galactic_transfer, it states: "However, players may freely travel to previously constructed bases in any galaxy." so I would assume this has changed in an update since this discussion topic was made. I checked in discord and it looks like you also keep access to past space stations you visited. Basically you can freely visit/explore past galaxies if you'd like. The use of the word "permanent" in the Galaxy_Centre page made me think otherwise. Silverwilver (talk) 03:53, 9 August 2022 (UTC)

So after a bunch of testing with going through the center and using the galaxy switching orbs from the story, I tried to get to galaxy 256, and it looped back to Euclid instead, save editing myself to 256, and then using the core went to hilbert, 257 went to calypso and so on.

So outside save editing directly to numbers outside the 255, you can't exit the loop, and if you exit the loop you will end up back in it as soon as you use any of the ways of switching galaxies in-game. You end up in the appropriate spot as if each set of 255 overlapped with the original set, i.e galaxy 259 overlaps with galaxy 4, and acts just like 4 would if you use any of the galaxy switches. Center goes to galaxy 5 and the galaxy type switches goes to the next one of the matching type, counting from galaxy 4.

Should the type (4 different ones) be added next to the galaxy names? and what type names should be used?

First category name is the internal name used for the type, second is the Id name used in the lang files. The 4 below each category are the different names for each category it can show in-game, the first one is what you see in the first galaxy but it may change later

Traveling to other galaxies?[]

ok so i got 1 simple question...is it worth going to another galaxies or should i just stay in Hilbert Dimension or Calypso. Does it benefit player at to move from galaxy to galaxy ? Afc that is goal of the game, but is there any benefit or point to it? or should we just stay in the same galaxy and explore until we get bored with the game?

That totally depends on why you want to play the game. There are so many possible goals that there really is no correct answer to your question! Some players have a goal of visiting as many galaxies as they can, so for them, moving from galaxy to galaxy does benefit them. Others prefer to discover as many Star systems or life forms as they can. For them, staying in one galaxy is perfectly fine, and they may never leave Hilbert. If you are following the Atlas path, then one galaxy works.

As far as I know, switching galaxies will not earn you extra points or extra gear or extra units. It's all in how you play the game. Ddfairchild (talk) 16:53, 1 January 2017 (UTC)

It's probably obvious to some people, but I feel it's worth noting for readers that the first handful of names are not as whimsically chosen as they look. Euclid is an early Greek mathematician who defined some of the basic mathematical rules for defining two dimensional shapes in both 2D and 3D space. This is followed by the Hilbert Dimension; Hilbert space/transform is the mathematical framework that take calculus beyond two dimensional models.

Next up Calypso breaks from the mathematical/spacial references but is still related. Calypso, Hesperius and Hyades - which are all names/terms that refers to the daughters of Atlas in Greek mythology. Beyond that the galaxies have a similar naming scheme to the randomly generated planet names and I'd hypothesize are using the same generator. 174.110.26.192 20:34, 4 April 2017 (UTC)

Hey, thanks for the fact-sharing! I figure that's worth having on the regular page so have added most of your information there. Ddfairchild (talk) 20:52, 4 April 2017 (UTC)

My explorations, albeit combined with some crazy edits to a save game file have me out at the Pivataylo Galaxy. Thats the One Billion Twenty Four Million One th Galaxy, or however you say it. Anyway it's galaxy #1,024,000,001 Should I keep going and see how far I can get? I dunno. Can I get MickyD's out here? Parsegp 28th April 2017