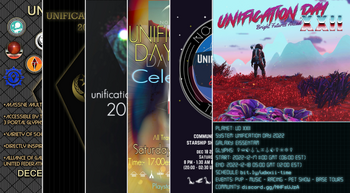 Unification Day is a fan-fiction event.

Unification Day is a player-created gathering of civilized space zones scheduled for December.

All alliances, civilizations, companies and lone travellers are called to participate.

The Empire of Jatriwil has been organizing the festival with great success since 2018.

The event has been supported and coordinated by the Federation since 2017. The Federation makes its resources and infrastructure for the UD available to the NMS community.

Although essentially a player-created event in its final incarnation, the concept of Unification Day does come directly from Hello Games itself.

Excerpt from a Distress Beacon at a Crashed Ship:

The logs reveal that the pilot was celebrating a festival known as 'Unification Day'. Groups of similar minds, unable to meet but attempting to find one another, to claim worlds across time and space. Once a year their various alliances, federations, hubs, and empires united to remember all that they were, and could become in time...

The location and the exact time of the event are determined every year in a general vote in the Federation Subreddit. Anyone can submit suggestions about the location. The Unification Day always takes place at the end of December.