Vortex Cube is a tradeable.

Vortex Cube is a tradeable and one of the trade commodities.

It can be found in and around caves on certain planets.

On "cluster" planets, they may be littered anywhere, including arrays of cubes above surface, clusters inside caves and tunnels, and small groups of cubes together around mountains and hills. These are extremely rare objects and are of high value. 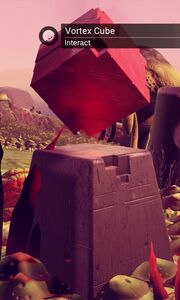 A vortex cube on a pedestal

Taking one from a pedestal will immediately assign the player a level-three wanted level, attracting Sentinel attention. This will often be two drones and a Sentinel Quad which are deployed to chase the player down and secure the object. When picked up from the ground, Sentinels will only attack if they notice it happening.

Dense metal objects that, long ago, materialised within subterranean networks throughout the Galaxy.

Extremely rare, and of high value.

Vortex Cube is not used as an ingredient for crafting.

Vortex Cube is not used as an ingredient for refining using a Refiner.

Vortex Cube is not used as an ingredient for cooking using a Nutrient Processor.

It seems that Vortex Cluster deposits are more common than first thought. According to Sean Murray, the planets are not a glitch and that they were built into the game. He also said that anyone who finds one of these planets will be extremely well off in the game.

If you find a cluster of Vortex Cubes on a planet, look for more. Most likely there will be more if you find at least three in close proximity.

In certain Vortex Planets, a glitch will cause Vortex Cubes to reappear after being taken as a solid object that cannot be scanned or grabbed, and disappears when looked at.

Occasionally picking up the Vortex cube can give the player a "big ball" item.

Uses: Great for getting back out of large Vortex Caves, as it tells you if you are retracing your steps or not.